Indian steel sector plays a crucial part in the growth and development of the nation and is currently the fourth-largest producer of steel after China, Japan and the US. Rising domestic demand by sectors such as infrastructure, real estate and automobiles enable the Indian steel industry to compete on global front. Domestic availability of raw materials such as iron ore and cost-effective labour mainly provide the required support to steel sector. The Indian steel industry is primarily divided into primary and secondary sectors. The primary sector includes a few large integrated steel providers producing billets, slabs and hot rolled coils, while the secondary sector involves small units focused on the production of value-added products such as cold rolled coils, galvanised coils, angles, columns, beams and other re-rollers, and sponge iron units. Both segments cater to different market segment.

Production of finished steel declined 1.4 per cent at 83.309 mt during April-February 2015-16 as compared to last year, in which the non-alloy steel segment contributed 75.342 mt, lower by 1.6 per cent, while the rest was the contribution of the alloy steel segment (including stainless steel), where production for sale was up by 1.2 per cent. In the total production of finished non-alloy steel, contribution of the non-flat segment stood at 38.452 mt (up by 4 per cent) while that of the flat segment stood at 36.89 mt (decline of 7 per cent). In the non-flat, non-alloy segment, production for sale of bars & rods, structurals and railway materials stood respectively at 31 mt (up by 5 per cent), 6.9 mt (up by 2 per cent) and 0.79 mt (up by 5 per cent) as compared to last year. On the other hand, for the flat segment, with the exception of HR Sheets and pipes, production of finished steel was down for all other items like Plates (3.9 mt, down by 10 per cent), HRC (17 mt, down by 10 per cent), CRC (6.4 mt, down by 6 per cent) and GP/GC Sheets (6 mt, down by 5 per cent). 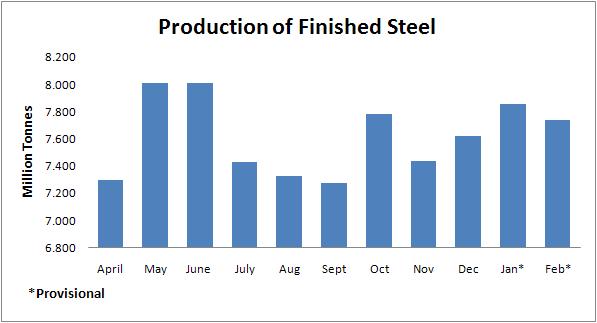 During April-February 2015-16, real consumption (or simply consumption) of total finished steel stood at 72.964 mt, 4.6 per cent higher compared to last year. For non-alloy steel, contribution of the non-flat segment stood at 37.76 mt, up by 7.4 per cent over last year and that of the flat segment (after accounting for double counting) stood at 28.167 mt, down by 1.2 per cent over last year, taking total non-alloy consumption (after double counting) to 65.927 mt, up by 4 per cent. The remainder was the contribution of the alloy/stainless segment, which reported a growth of 15 per cent during this period. In the non-alloy, non-flat segment, the major contributor to consumption was bars & rods of 30 mt; up by 8.5 per cent whereas for the flat segment, consumption was led by HRC of 19 mt, up by 1.3 per cent.

Indian finished steel imports during April-February 2015-16 stood at 10.21 million tonnes, crossing the 9.3 million tonnes full year level of 2014-15. The country with this much import also created another record – of stepping into the double-digit zone for the first time in history steel industry. While the cumulative numbers for imports continued to record high growth (20.4 per cent y-o-y during April-February 2015-16), yet the monthly numbers appear to reflect some impact of policy actions taken towards the second half of 2015 to control imports. For, imports during February 2016 at 0.911 mt were down by 0.2 per cent over January 2016 and also down, by 7.4 per cent when compared to February 2015. Nonetheless, trends in steel import would remain under the scanner of most in the coming days, it continues to account for as high as 14 per cent of the total finished steel consumed by the country during April-February 2015-16, its high 20 per cent growth rate was influenced partly by the low growth (decline) in indigenous supply (production for sale) during this period. 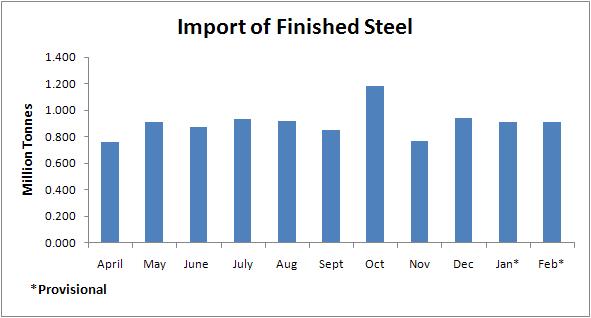 Compared to February 2015, average (retail) market prices in all four metro cities (Kolkata, Delhi, Mumbai and Chennai) in February 2016 declined for both long products (represented by TMT 10 mm) and flat products (represented by HRC 2 mm), largely in response to domestic demand-supply conditions (including impact of raw materials) and partly global influence. Compared to January 2016, TMT prices in February 2016 increased in all the markets except Chennai (mild decline), while for HRC prices declined for the Kolkata market, remained same in Chennai market and increased in case of the other two, i.e. Delhi and Mumbai market. TMT prices were highest in the Delhi market (Rs 36,538/t) and lowest in the Kolkata market (Rs 33,360/t), while HRC prices were highest in the Chennai market (Rs 35,306/t) and lowest in the Kolkata market (Rs 33,527/t) during February 2016. However, February 2016 saw the imposition of the MIP on steel imports vide government notification dated February 5, 2016. Post-MIP, domestic market conditions got a major boost and this was reflected in a spurt in domestic steel prices, across items and across most markets. This is shown in the table below for TMT and HRC in the four metro markets based on prices as on February 15, 2016 and their variation with respective pre-MIP levels (i.e. as on February 1, 2016).

The Indian metallurgical industries attracted foreign direct investments (FDI) to the tune of Rs 671.88 crore, in October- December 2015 period, up by over 42.38 percent, as compared to Rs 471.89 crore, in corresponding period previous year, it increased by around nine fold as compared to Rs 76.94 crore in previous quarter. Indian metallurgical industries attracted 3.16 percent of total inflow in Q3FY16. 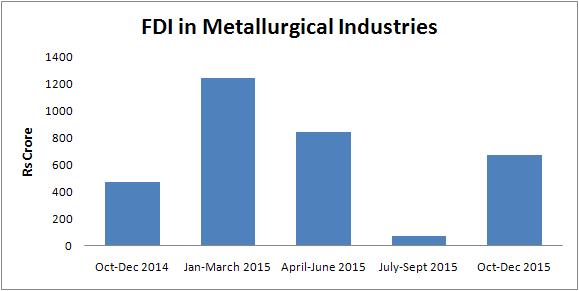 Government establishes SRTMI: Steel Research and Technology Mission of India (SRTMI) was established to spearhead Research and Development (R&D) activities of national importance in collaboration with steel industry with an initial corpus of Rs 200 crore.

In a move to provide further protection to the domestic Steel Sector, the government has started investigation of dumping by six countries – China, Japan, Russia, Korea, Brazil and Indonesia. The Directorate General of Anti-Dumping and Allied Duties has initiated antidumping investigation on the basis of the application made by Steel Authority of India, JSW Steel and Essar Steel. The plea is supported by Tata Steel and Jindal Steel and Power. The applicants have requested for retrospective imposition of the anti-dumping duty due to the history of dumping by the six exporting countries. The products covered under investigations are hot rolled coils of width up to 2100mm and thickness up to 25mm, hot rolled sheet and plates of a width up to 4950 mm and thickness upto150 mm. The period of investigation is July-December 2015. In September last year, the government imposed a provisional safeguard import duty on some steel products for 200 days and extended it till March 2018 to protect domestic manufacturers from cheap Chinese imports. Additional protection of Minimum Import Price was imposed by the government in February for six months, even while retaining the safeguard duty. The five steel companies have claimed that they have suffered material injury due to the alleged dumping by the six countries and have furnished evidence of it. The investigative authority has found sufficient prima facie evidence of injury being suffered by the applicants caused by the dumped imports from the subject countries to justify initiation of an anti-dumping investigation.

India extends safeguard duty on some steel imports up to 2018

India extended a safeguard duty on some steel imports up to 2018 as officials grapple with an onslaught of cheap supplies amid a global glut. A levy of 20 per cent applies until mid September this year, dropping in stages to 10 per cent for the six months through mid-March 2018. The measure doesn’t apply to products coming in at or above the minimum import prices. Inward shipments have caused and threaten to cause serious harm to the domestic industry. India imposed the duty in September 2015 for 200 days and set floor prices for some products in February, after a slowdown in China exacerbated an oversupply of steel worldwide. Tata Steel will consider selling its UK steel division in part because of weaker demand and prices. Safeguard duties are temporary levies imposed to shield domestic industry from a damaging surge in imports. Steel imports into India fell 7.3 per cent to 912,000 metric tonnes last month from a year earlier but were up 20.5 per cent in the 11 months through February.

Government looking to create a fund for Steel Sector under NIIF

Government is looking to form a fund under India’s first sovereign wealth fund, NIIF, which will address capital requirements of domestic steel companies. The government in December last year created the Rs 40,000 crore National Investment and Infrastructure Fund (NIIF) as an investment vehicle for funding commercially viable greenfield, brownfield and stalled projects. The Finance Ministry had signed an MoU with Abu Dhabi and Russian nano-technology company and is also having discussions with some funds with the UK for investments in NIIF. While the government will invest Rs 20,000 crore in NIIF, the remaining amount will come from private investors. NIIF is set up as a Fund of Funds (Category II Alternate Investment Fund) with a proposed series of funds.

Indian steel sector is going through one of the most challenging phase. Sluggish domestic demand, constraints of Iron ore supply coupled with strong domestic Iron ore prices are playing spoil sport for the Steel Sector. Moreover, dumping of steel into India by steel-surplus countries, like China, Russia, Japan and Korea too is proving to be a big disadvantage for the sector. However, government is constantly taking various initiatives like establishment of Steel Research and Technology Mission of India (SRTMI), Skill Development Initiatives and has mooted a perspective plan to boost domestic steel capacity to 300mt per annum by 2025. In tandem, with a strong economic outlook and plans to expand steel production, it is likely that India will be on a fast-track growth path in steel production to be the second-largest steel producer within a few years. Moreover, India’s comparatively low per capita steel consumption and the expected rise in consumption due to increased infrastructure construction and the thriving automobile and railways sectors too will provide the required support to the steel sector in coming time.